How to Reassign Meaning and Damage the Art of Conversation

Even though cynics and those who throw their hands up in the air in desperation at the difficulties and frustrations of conversation think that conversation is naïve, they are wrong. If you are going to avoid force or violence or ethically challenged manipulations, then the only way to morally and fully engage in knowledge acquisition and quality decision-making is through the interaction process. The democratic process does not rely on pre-established ideological positions (e.g., “socialism” “communism” “capitalism”) that requires the carrier of these ideologies to simply rigidly and blindly defend such a position. No, the democratic process relies more on the epistemic value of communication and the conversation that produces it.

And democratic cultures have long histories of dictating the importance of education in order to participate in a citizen-based democracy as well as the availability and quality of information. That’s why the press in the United States has as much freedom as it does. The press is afforded special attention. But the kind of conflict I mostly think about and work on (intractable conflicts) don’t usually have people participating on the basis of democratic ideals and deliberation. In fact, the participants are usually entrenched in their beliefs and are as rigid as any true believer.

In an interesting study, published in the Journal of Public Deliberation 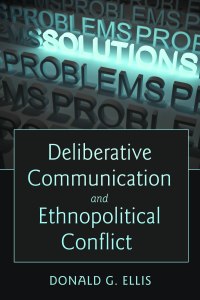 , the author explains how literacy is not even necessary for deliberation. Being literate and informed is always assumed to be fundamental to a complex democracy. This has led throughout history to institutions and programs devoted to citizen education, school wide programs, and a host of activities concerning the development of citizenship and democratic habits. The relationship between an informed citizenry and the general public has been written about by Plato, Rosseau, John Stuart Mill, Dewey, and any other number of heavyweights. But it turns out that high levels of literacy are not the only requirement for good public deliberation.

I won’t fully engage the concept of “defining literacy” except that I’m thinking about it as the basic inability to read and write. The term “literacy” has flexed its semantic muscles and is now used to refer to “media literacy,” “numeric literacy,” and simple knowledge of issues. But Bhatia, in the article cited above, explains how television can contribute to information acquisition and exposure and brings a person with no or limited knowledge up a rung or two.

A recent essay in Tablet magazine offered up an interesting case of a difficult conversation where the entrenched ideologies are religion and secular politics. Most of my examples in my recent book “Fierce Entanglements” have to do with Jihadis or religious settlers or people with extreme political beliefs. The author of this article, Liel Leibovitz, talks about the uselessness of having a conversation with someone like Noam Chomsky. The article explains what was supposed to be a reasonable attempt to have a conversation between Chomsky and Sam Harris. Chomsky’s beliefs are so fixed and so wrapped up in theories of American conspiracy and violence that the author concludes all conversation between people who disagree should be eliminated.

Chomsky believes that the United States is clearly the most violent and vicious terrorist unit in the world and 9/11 was insignificant by comparison. 9/11 was just America getting a taste of its own. Of course, Chomsky cannot have a discussion without invoking Israel and heaping blame on the Jewish state. What happens during these conversations is that the meanings of words such as “terrorism” begin to drain and become reassigned usually broadened to be more inclusive of things it did not originally include. So there’s a particular definition of terrorism which refers to acts of violence against innocents for the purpose of sowing fear and confusion. Then the meaning gets changed to include anybody who engages in violence whom you don’t like. All context and nuance is lost.

Good vigorous conversation and argument seems to be a fading art. I guess we will have to return to literacy instruction to restore the art of conversation.

Posted on May 12, 2015, in Democracy and tagged Deliberation, political argument. Bookmark the permalink. Comments Off on How to Reassign Meaning and Damage the Art of Conversation.