Photo Manipulation by Hamas in Gaza

Photo manipulation has been with us a long time. There are two types of manipulations: the first is to alter the image and the second is to simply deceive the viewer about the content or story behind the image. Lesser artists tried to copy the great masters and pass them off as originals. In later years images were touched up with ink, double exposure, and airbrushing. But the possibilities for manipulation of photographic images with the advent of the digital age increased exponentially. It also has become easier to copy and send images such that they circulate and take on a reality of their own. An image can be false or deceptive but millions of people have been exposed to it before discovering the deception. Take the example below: 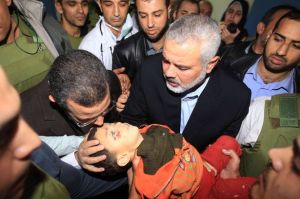 This is the sort of disinformation that can be easily spread by manipulating images. The picture of the dead child spread quickly across the Internet and was described as a dead girl in the arms of the Palestinian Prime Minister Ismail Haniyeh. The child was killed during the Gaza war in December 2012 and, as reported by Palestinian sources, was killed by an Israeli rocket. But according to Honest Reporting, a website that tracks deception and manipulation, the child was not killed by Israel but rather an errant rocket fired by Hamas. This image spread through Twitter and Facebook and imprinted itself in the minds of many before the correction.

The picture below is of an Israeli child wounded by Palestinian rockets. You can see the Hebrew lettering on the jacket of the man holding the child and, as the picture points out, the coat of arms in the upper left is of the city in southern Israel Kiryat Malakhi.

In a very real sense, everything about a photographic image has the potential for manipulation and untruths. Beginning with the choice of lens, available light, and how close or far to stand from the subject a photographer makes ethical decisions. And it is certainly possible to manipulate an image in the interest of increasing accuracy or improving the emotional impact for artistic reasons. But these composition decisions are more controllable and subject to standard considerations than blatant lies about the content of a photograph.

One consequence of this easy deception is a loss of faith in the photojournalistic profession and the power of the visual image. Since the goal of political photographs or journalistic photography is to reproduce accurately some social or political reality a powerful source of truth and emotion is lost as confidence in the accuracy of images diminishes.

To extend the Churchillian metaphor from the photograph above, truth has to get its pants on faster. This is an issue of the distribution of images rather than their compositional manipulation. Visual processing is powerfully analogic and impressionistic and only takes a few seconds. The old refrain of “a picture being worth 1000 words” is true enough. The deadening cynicism that results from exposure to too many manipulated, exaggerated, and false visual images makes it even more difficult for quality images to do the work for which they are intended. These visual “lies”, perpetrated mostly by Hamas detract from the peace process and exacerbate the conflict rather than mediate it. Agreement on disallowing these practices must be part of a final peace process, otherwise truth will not only be slow to get its pants on it will trip over itself.