No group drags hate around in its wake like the Jews and their burdensome anti-Semitism. Throughout history anti-Semitism has found its way into every stratum of society. From the rich theoretical and intellectual tradition of Marxist ideology, to the ignorant and hate filled skinheads who are the distorted prodigy of the Nazis, anti-Semitism rears its ugly head.

Voltaire, for example, is important to humanity as a foundational intellectual of the Enlightenment—the moment in history when science and reason were elevated above the irrational belief and traditionalism of religion and royalty. Individual freedom is the cornerstone of secular culture, and names such as Voltaire are now shorthand for rational and liberal thought.

But Voltaire was also a compulsive anti-Semite, using multiple texts to place Jews well outside the great civilizations of ancient Greece and Rome, and indeed beyond redemption. Voltaire pronounced concerning the Jews: “They are, all of them, born with raging fanaticism in their hearts, just as the Bretons and the Germans are born with blond hair.” In another essay, Voltaire concluded that the Jews deserve to be punished, for this is your destiny.”

Why is it that anti-Semitism can weave its way into the most elevated intellectual thought and then back again to rank hatred? Anti-Semitism pervades cultures at all levels: the Jews killed Christ, were responsible for the bubonic plague, used the blood of Christian children for their Passover ritual, and it goes on.

Interestingly, in the 1300s it was noted that the Jews were dying from the bubonic plague at a slower rate and blamed for causing the disease. The claim that all the Jews left the World Trade Center just before the planes hit the building seems to maintain a historical consistency that paints the Jews as blame full tricksters worthy of annihilation. If the Jews did die at a slower rate of bubonic plague it probably had more to do with the tradition of ritual handwashing before eating bread, bathing, or the Sabbath.

This long history of prejudice against the Jews was in full force on January 6th when a group of white supremacists stormed the capital building in a somewhat pathetic effort to take over the government. 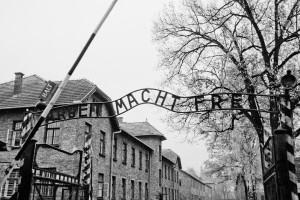 Photos and video of the rioters show some with attire bearing the words “work brings freedom” – a translation of the Nazis’ infamous “arbeit macht frei” written above the entrance to Auschwitz-Birkenau. One fellow was wearing a T-shirt that said “Camp Auschwitz”. On the back of the shirt it said “staff.” So this guy sees himself as overseeing the extermination of Jews at a concentration camp. And he takes pride in such identity.

The protesters, egged on by Trump, smashed windows and broke through police lines to take control of the seat of US government, as lawmakers met to confirm President-Elect Joe Biden’s election victory in a vote Trump said was rigged.

Surely a group of right-wing white supremacists who storm the capital building with violence in their hearts would not pass up an opportunity to express themselves.

Bari Weiss in her book How to Fight anti-Semitism takes comfort in one thing with respect to right wing anti-Semites, they don’t hide their face. Their goals are blunt and clear. That makes it easy to recognize anti-Semitism where it stands. Now we only have to do something about it.

Comments Off on Trump’s Progeny: anti-Semites