← Israeli Elections and the Move to Moderation
Obama’s Anti-Democratic Assassinations: His Robot Killers Will Get You! →

Group Level Perceptions and Racism in the Israeli-Palestinian Conflict

When grappling with the difficult issues of intractable conflicts and how to moderate them one always encounters the “contact” solution; in other words, the two competing groups must get together and begin the process of communicating in such a way that the differences dissipate. There is sound research supporting such a suggestion and my own work, along with many others, is deeply focused on the processes of difficult conversations – or, as some term, dialogue.

There is always then a chorus of people who chuckle and say “this won’t work”. The depth and intensity of the conflict between the two parties, so the claim goes, is so great that talk is a waste of time. Well, this is true sometimes. I know of no serious scholar who believes that talk is magic, but I also know of no serious scholar who doesn’t recognize the centrality of interaction, contact, and some properly controlled form of dialogue. 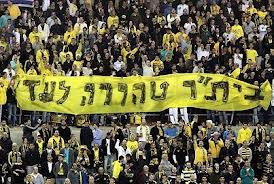 What do you do about situations we’ve been reading about recently? I’m talking about the reports of fan racism in soccer in Israel. Israel has suffered a few difficult instances in the last few years with respect to violence against Arabs and Palestinians. But the sports context seems to exacerbate the problem and provide a context for a poison cocktail of attitudes, energized competition, and ignorance that produces a combustible mixture of racism.

Recently, plans by Beitar Jerusalem soccer club to add its first Muslim players prompted violent and racist incidents in Israel. During a recent match between Beitar and a team from Umm El Fahm hundreds of police had to be deployed. Beitar Jerusalem fans held up the banner above(which reads “Beitar will remain pure forever”) which connotes very unpleasant references to “group purity” an attitude that Jews – at least most Jews – would like to forget. Beitar gets its name from the youth movement, linked to Herut the forerunner of Likud, which opposes Israel’s Arab neighbors. The team name symbolizes a position of honor in Israeli youth movements. Some Beitar fans lead chants calling the Arabs offensive names, which prompts the Arab teams to call out “Allahu akbar.” Some Israeli teams do include Arabs but not Beitar.

The sports environment activates group level perceptions that cause fans and players to identify even more strongly with their national and ethnic group. Sports is a team activity and it is thus easier to foreground a collective group identity. The “individual” versus “group” level of perception is exaggerated in the sports context. People can feel threatened or vulnerable and they can feel this on an individual basis or a group basis, and the two levels of perception can be quite distinct with some situations, such as during heated competition, causing greater distance between the two. For example, if a Jew were asked whether or not he feels vulnerable or threatened he might say “no.” He personally feels secure and not threatened. But if you ask that same person whether or not his group (Jews) is vulnerable or threatened he might say “yes” my group the Jews are vulnerable and threatened. Some studies show that the more one feels his or her group is vulnerable or threatened the more conservative they are with respect to social policies and security.

It’s clear that Israel is expressing its insecurities and hardening its own political stances because it increasingly feels threatened and vulnerable at the group level. The sports context and public displays of demands for “purity” (meaning no Arabs) are troubling examples of the increased polarization in the Israeli-Palestinian conflict. Nothing is separated from politics in Israel because conflicts of such intractability permeate the entire society. The whole culture participates in the conflict ethos. Ultimately the goal is to play soccer without charging ethnic tensions. Talk will not solve the problem at the moment but it will one day.