Learning How to Talk to People 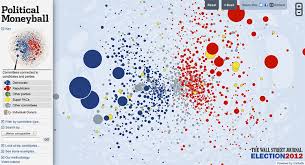 The polarization that currently characterizes the American political environment, and is graphically depicted above, is a consequence of the degeneration of political relationships. Political friendships treat opponents as respectful adversaries, not enemies, that have common interests in problem resolution as much as anything else. The issue sophistication that comes with political relationships is quite compatible with the ability to sustain “reasonable disagreement.” Solving political and ethnopolitical conflicts involves initiating the two conflicting groups into the larger cultural conversation, where the understanding is that the conversation is about the relationship between the two groups. This involves creating a relationship where members of each group understand that they must engage in reasonable discourse, accept the burdens of justification, and reject illiberal attitudes and behaviors. Another way to think about it is as a network of weak ties. Weak ties are important forms of relationships that are more casual friendships or work relationships (e.g., acquaintance or coworkers) and engage in less intimate exchanges and share fewer types of information and support than those who report stronger relationships. Strong ties include in their exchanges a higher level of intimacy, more self disclosure, emotional as well as instrumental exchanges, reciprocity in exchanges, and more frequent interaction. We have fewer strong ties and they are more important to our personal lives. Facebook and electronic contacts create numerous weak ties that serve important functions.

What Danielle Allen (2004), in her book “Talking to Strangers”, describes as “political friendship” is a sort of important weak tie. This is the sort of friendship that goes beyond the close relationships we have with family members and intimates. Political friendship is a set of practices and habits used to solve problems and bridge difficult differences. Emotional attachment to the other is less important than the realization of interdependence and the need for practical problem resolution. This form of a communicative relationship serves as a useful outlet for conflict resolution, and allows minority groups in multicultural societies to establish mature relationships with the dominant group.

The concept of political friendship is important and deserving of some elaboration. It is necessary to develop a healthy path to the resolution and reconciliation of group conflicts in order to provide either citizens or members of competing groups with political and interpersonal agency. The idea of political friendship is particularly associated with citizenship which is not necessarily a matter of civic duties but a communicative role that values negotiation and reciprocity. It is an excellent relationship to cultivate between members of different cultural and political groups because it is based more on trust than self-interest. Political friendship recognizes self-interest but develops a relationship that rests on equitable self-interest; that is, a relationship where each attends to the utilitarian needs of the other. As Allen (2004) writes, “Equity entails, above all else and as in friendship a habit of attention by which citizens are attuned to the balances and imbalances in what citizens are giving up for each other.” (p. 134). Political friendship is less concerned with intimacy because intimacy is reserved for relatively few relationships that are more absorbing and based on sacrifice and strong identity with the other. But utilitarian political relationships can apply to large numbers of people and is focused on the pragmatics of problem solving or resource gratification. Parent-child, ruler and ruled, or superior- subordinate relationships are not political relationships because they limit the autonomy and agency of one person (the child, ruled, or subordinate) and are based on maximization of differences. In short, the political friendship relationship is central to the problems associated with multicultural contact and the ability of groups to develop their capacities for trust and communication. As Allen (2004) points out, we have to teach people how to “talk to strangers.”

It is necessary to identify some conditions of political friendship. These are habits of communication that facilitate the relationship. They include recognizing and publicly acknowledging groups and their differences as well as promoting deliberative environments and intelligent judgment. Many of these communication behaviors require exceptional sensitivity and tolerance. Recognizing a group, for example, that is less talkative or more remote from Western habits of thinking and either accepting the differences or trying to meld cultural norms is difficult. So minority groups simply need to learn communication skills most associated with success depending on the nature of the dominant culture. Diverse groups must understand their problems as “public” problems. Under the best conditions different groups will have secure knowledge of each other and a similar level of understanding about what is occurring between them.

Posted on October 7, 2013, in Political Conflict and tagged Communication strategy, Conflict Resolution, political argument. Bookmark the permalink. Comments Off on Learning How to Talk to People.