This will not stop if we don’t talk 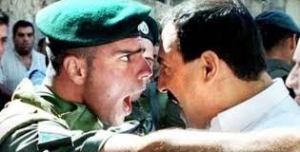 This won’t stop if we don’t talk

It is probably unimaginable to think of Hamas and Israel actually talking civilly but getting to the negotiating table is the only answer. Here are some thoughts on doing that.

The above phrase in transliterated Hebrew is going around Israel. It means “this will not stop if we don’t talk” and it appears on protest signs, news stories, and casual conversation. It rhymes in Hebrew. Truer words have never been spoken. The issue is not how to talk to each other or what form those talks should take, the issue is getting to the table. All of our knowledge and skill at communication, dialogue and deliberation, is wasted and unavailable if you cannot get the two parties to the table. If Hamas or Israel insists that the other side must be destroyed or their incompatibilities are irreversible and there’s nothing to talk about, then the violence and conflict will simply continue.

At the moment I’m concerned about getting to the table. Essentially, this is the issue of “ripeness” which you can read more about here. Ripeness refers to the right time or the belief that the conditions are best for talking and solving problems. Right now no one would consider the time “ripe” for conflict management between Israel and Hamas for example. The time might be necessary or the most urgent given the violence but the situation is not ripe. “Ripeness” is a delicate matter because it is a little subjective and difficult to know when exactly is the “right time.” One can move too early, too late, too fast, or misjudge the other. Moreover, conflicts usually have more than one ripe time.

But I do not advocate sitting around waiting for the ripe moment. Participants in a conflict sometimes avoid ripe situations because they get more out of prolonging the conflict. Hamas always says it has “time on its side” because the status attributions it receives from war with Israel outweigh any benefits of negotiation and talk. One question becomes then how you create ripeness, how do you construct conditions that will increase the chances of bringing two sides to the table? Here are some strategies:

1. Third parties are always good sources of incentives. The Middle East has been most calm and in control when there is a significant international polity (the Ottoman Empire, the British Mandate, the United States,) that can provide incentives for talks. Actually, anytime a third-party is willing to intervene and try to mediate the conflict it is a good indication of ripeness.

2. The second strategy for getting people to the table, although a less pleasant one, is waiting until things are so bad that negotiation becomes attractive. As the saying goes, “sometimes things have to get worse before they can get better.”

3. Sometimes it’s possible to get people to the negotiating table by promising them more than they expect. Perhaps some symbolic recognition that was earlier denied, or a tangible resource.

4. New ways to be interdependent that benefit both sides are always strong strategies. Interdependence creates common interest and overlapping concerns and the two parties will talk if the reward possibilities are sufficient.

5. Pre-negotiations or “talking about talk.” Finally, it is sometimes useful to get the two parties to talk about how they would organize and develop dialogue or deliberation. Don’t engage in actual discussion and deliberation and do not term the conversation as official negotiation or discussion. But get the two parties together and have them imagine what the process would look like. This should move them closer to the actual experience of problem-solving deliberation.

Persuading the two parties to talk and find a way to negotiate a settlement – to get them to the table – is typically more difficult than constructing an actual settlement package. There are lots of solutions and proposals to end and contain the Israeli-Palestinian conflict. Many of them are understood and accepted by both parties and not very controversial. But none of this matters if the two parties do not talk.