The Media’s Distorted Relationship with Israel 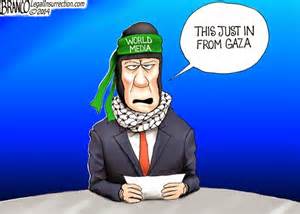 Matti Friedman writing in The Atlantic wrote a trenchant article about what the media gets wrong with Israel. Friedman makes the point that the press is failing the public when it comes to its duty to inform and provide a platform for issues and debate. In a number of publications Friedman has pointed out stories that are purely ideological, an overemphasis on stories with a certain perspective, and a disproportionate amount of media attention on the conflict without being particularly informative. You can read The Atlantic article here.

His analysis is important because it recognizes the banality of news gathering (the pressure of deadlines, journalist fatigue, financial constraints, distractions) and how it influences news gathering and results in mistakes and minor distortions. But Friedman claims that the true explanation lies elsewhere and that the flow of information is intentionally manipulated. Here’s his explanation.

First, international journalists in Israel live in the same social context and have a certain uniformity of attitude and behavior. The people in these groups know one another and that’s why four or five stories written by different people sound alike. There is a uniformity to the stories because this group of people share information and talk on a regular basis. Journalists also tend to be liberal and that’s one reason that the Israeli story, according to Matti Friedman, is less known and understood then the Palestinian story.

A disdain for Israel is almost a prerequisite for admission to this journalist social club. The conscientious new reporter arriving in Israel will spend time educating himself or herself about the conflict including its history, religion, and cultural implications. But many new journalist arrivals to Israel cling to their colleagues who already have a framework and a “story” about who’s a good guy who’s a bad guy. Many of the standard criticisms have already been described and producing a story is little more than coordinating and repackaging stories that have already been written. The Middle East is full of failed governments that are authoritarian and corrupt, but there is more likely to be a story critical of Israel than anyone else.

Friedman bluntly indicts the Associated Press for having moved from a journalistic tradition of careful description to one of advocacy. Moreover, there has developed a narrative, or a story with standard plot lines and characteristics, that is increasingly consistent and coherent for both Palestinians and Israelis. But the Israeli narrative is fueled more by ideology than facts. The standard script for Israel has more bad guys (settlers, far right politicians, IDF, Netanyahu), but the only Palestinian “bad guys” are abstract groups (e.g. Jihadists).

There has always been a gap between what journalists write and what is actually going on, but in the case of the Israel-Palestine conflict the gap is too large and the distortions too intentional. The Israeli narrative, in addition to its long list of bad guys, portrays the Palestinians as weak and innocent victims and the Israelis as oppressors. Groups like Hamas choose journalists to talk to carefully and use them to magnify messages.

There is a cynical attitude about truth in the modern world which denies its existence and claims that any agreed-upon truths are social constructions anyway. Such an argument might be defensible on the basis of philosophical discourse but less so on the basis of political discourse. Much of what is written about Israel fits that narrative constructed by others and is either completely untrue or “untrue enough.” Ferreting out and reviewing as much truth as possible is a continuing journalist challenge.

Posted on February 2, 2015, in Communication and Conflict Resolution, Media and politics and tagged bias, Journalism, Media, Narrative. Bookmark the permalink. Comments Off on The Media’s Distorted Relationship with Israel.