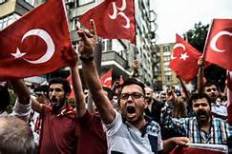 It’s pretty easy for most Americans to pay little attention to Turkey. It seems to be a faraway exotic place that has little effect on their lives. But the truth is otherwise. Turkey has been a partner to the United States and Israel and informed a set of relationships with these two countries that help stabilize that area of the world. But more important than that, Turkey has been a model for Islamic democracy.

Ataturk established modern Turkey as a secular, European, Westernized state. He used the government to establish educational and political policies to shape the nation into a political culture that was close to gaining entry into the European Union. Ataturk literally outlawed many symbols of Islam and tried to relegate it more to the private sphere.

But there was a referendum last week on constitutional changes and Erdogan and his political supporters won a narrow victory. Now the country is about to be shaped in Erdogan’s image rather than Ataturk’s. Erdogan will move Turkey more toward centralized power supported by Islamic parties. None of this bodes well for Turkey. Moreover, and even more dangerously, Turkey is divided. Erdogan won a narrow victory. Just about half the population voted for him and the other half dislikes him intensely. These are the conditions for future contentious political behavior.

It appears that Erdogan knows how to distribute rewards making important constituents happy; a fairly large number of people have benefited from Erdogan’s largess. But these benefits are not merit-based or the result of significant contributions to economic, commercial, or political policies in Turkey. They are the result of payoffs to those who are more supportive of Erdogan and constitutional changes. And now the AKP (Erdogan’s political party) can continue its program of returning to Islamizing the state. Yet, there are some hopeful signs.

Turkey it is now quite diverse demographically, and too big economically to be easily redefined on the basis of one person. And despite Erdogan’s cronies, who always rear their ugly heads from the system of political payoffs, the real economic power in the country is dependent on secular, democratic, pro-Western liberal values. So if Turkey stays Democratic much of its progress will be maintained. But the worisome part is that Erdogan may realize full well that democracy is his primary enemy and therefore become more autocratic.

So why should the average American care about any of this? Well a couple of reasons. First of all the only way we are going to make some stable peace with Islamic nations is through elements, minimum as they need to be, of shared Democratic processes. If Erdogan becomes less democratic then the state becomes more Islamic and increases its distance and alienation from Western states and Israel. Turkey could have been a model for future Islamic democracy. Secondly, the Kurds have been a very supportive culture for the United States and we owe them our best efforts to establish a Kurdish state. This is of course very complex and an intractable issue but moves no closer to some sort of resolution if Turkey retreats into conservatism and religiosity. Third, Turkey demonstrated to the Arab world that some decent relationship with Israel was possible. Given the combustible relationship with our ally Israel, any indicator of stability is welcome.

Posted on April 21, 2017, in Communication and Conflict Resolution, Democracy and tagged democracy, Turkey. Bookmark the permalink. Comments Off on Why Turkey Matters.