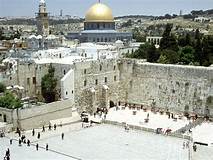 The legal and political standing of Jerusalem remains unclear and subject to confusion. Recall from last week’s post that when the United Nations decided to divide Palestine into a Jewish and Arab state Jerusalem was not included. It was to be administered by an international group until some equitable agreement could be reached as a result of negotiations between Israelis and Palestinians. Some such third-party administering unit is still a viable idea that may be a part of an end-of-conflict solution. It recognizes the importance of the religious sites for all groups and keeps the various sides engaged with one another. Still, the likelihood that Israel will forgo sovereignty over the old city is slim.

But the Arabs did not accept the partition plan and war was the result. At the end of the war in 1948 Israel had taken West Jerusalem and Jordan East Jerusalem including the old city, the center of the religious life. During the 19 years that Jordan occupied East Jerusalem the Palestinians grew into a nationalist movement and made increasing demands on Jerusalem as a future capital. But after 1967 Israel expanded the city’s borders and added Jewish residents to the neighborhood. As of 2015 Arabs made up 38% of the population (Central Bureau of Statistics) of Jerusalem.

The incorporation of Arab neighborhoods into the municipality of Jerusalem has created a regular tension between Palestinians and Israelis. For example, the Palestinians do not participate – or participate minimally – in civil society governance and therefore suffer from poor services with respect to roads, schools, garbage collection etc. The Palestinians are designated as permanent residents but such a status can be revoked at any time.

In East Jerusalem Israel has also incorporated some neighborhoods that were never a part of Jerusalem in the first place, and has built new neighborhoods intended for Jews only. This, of course, is the settler problem along with the aggressive appropriation of land designed to create “facts on the ground.” Interestingly, much of this policy has made things even worse as it becomes increasingly difficult to divide Jerusalem and assign sections of the city to the Palestinians and others to the Israelis. And Palestinians consistently maintain that there will be no Palestinian state that does not include Jerusalem as its capital.

Finally, any future Jerusalem that has the Palestinian capital in East Jerusalem and Israel’s capital in the West must be the result of mutual agreement and acceptance because there cannot be a dividing line strictly separating the two sides. There must be free and easy movement if the religious sites of the old city are to be available to everyone.

The notion that the two state solution is dead because the United States will move (not until 2020) its embassy to Jerusalem is indefensible. A two state solution with Jerusalem as a capital for both sides has been a part of just about everybody’s proposal from Clinton, to Barak, to Olmert.

Trump’s speech did recognize a reality that negotiations and discussions between Israelis and Palestinians are still viable. And, on the contrary, this move by the United States does not distort the peace process but stimulates it.

Comments Off on More Jerusalem for Dummies