← Ten Points for Democracy Activists
The Irish and the Jews →

The Real “State of the Union” 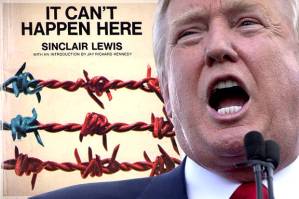 Donald Trump is leading this country into a dark place.  Let us remember what Sinclair Lewis said in the 1930s: when fascism comes to America that it will be wrapped in the flag, sing the national anthem, carry a cross and be called, “Americanism”. But I won’t even use the loaded word “fascism.” We can just go down the list of typical qualities associated with the nativism and corruption of justice associated w1ith such political philosophies. Many points in Trump’s “State of the Union” signal a dangerous conservative trend and potential constitutional crisis.

Even at the risk of exaggeration, which I prefer to avoid, Trump “bumps up against” fascist qualities rooted in right-wing nativism. His criticism of law enforcement agencies is unprecedented and a potential danger of considerable importance. All the signs were in his State of the Union speech and should be a serious warning about the real “State of the Union.”

Posted on January 31, 2018, in Communication and Conflict Resolution, Political Parties and Elections and tagged nationalism, Trump. Bookmark the permalink. 1 Comment.