Jihadists Humiliate Us: What Can We Do 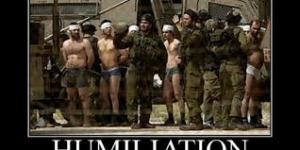 I had a good chuckle the other day at the story of the Iraqi insurgents who captured the city of Mosul and found five nice American-made helicopters. They noted that the helicopters were pretty new and said in a posting on Twitter, “We expect the Americans to honor the warranty for these helicopters and service them for us.” Apparently even one of the most brutal jihadist groups has a sense of humor. But there is more than a prideful display of humor here. The comment was meant to humiliate. Even though it is a rather benign attempt at humiliation, and aimed at a strong target, it meets the conditions of humiliation as a communicative act between groups engaged in intergroup conflict.

Humiliation is an attempt to subjugate or diminish the pride and dignity of the other. Moreover the recipient of the humiliation is forced to feel helpless and if the humiliation is potent and long-lasting it can have deep psychological effects. Traditional societies rely on a sense of order and hierarchy and keeping the lower ranks “down” is expected. But when someone of status or higher rank is humiliated it is especially unacceptable because it does not serve the social order of the group, and it is especially painful for the higher status recipient. Acts of revenge and retribution are common. Jealousy, which is a powerful jailhouse emotion, is rooted in humiliation and the sense of being rejected, inferior, and disrespected. You can read a little more here.

So what are we to think of our jihadist friends and their gleeful humiliation of the United States? We can ignore it which is often a good strategy and consistent with the popular ideology that says “nobody can humiliate you unless you let them.” This is not a platitude I consider very effective but it is the case that I have some control over how I feel. This little slight humiliation is insignificant enough such that ignoring it is easy. There is always dialogue and reconciliation and attempts to reconstruct relationships such that humiliation is not part of the new relationship. This is ideal and desirable, but difficult.

These jihadists fellows are feeling their oats with respect to military victories and this effort to exercise autonomy and stand up to the humiliater make for feelings of joyful catharsis. But if they were serious about problem-solving of any type they would take the next step which is to transition to a more balanced and respectful relationship. Former underlings who change their own consciousness first are in a position to change the other.

Then again, all of this is laughably idealistic as we read about the savagery of these ISIS (Islamic State in Iraq and Syria) groups who casually execute prisoners, behead rivals, and loot the communities they conquer. On second thought, a little humiliation does not sound so bad.