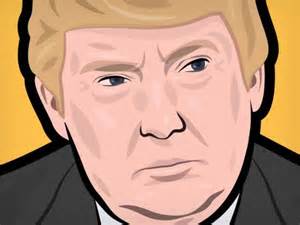 Trump is not a smart politician who knows what he’s doing. He doesn’t craft his populist message and ill manners into some clever verbal strategy that is designed to have a particular effect. No, he’s authentic. When you hear him fumble over ideas, encourage violence, display a lack of knowledge, make fun of others, lie, and express his racist and sexist ways he is acting genuinely and organically. This is who he is, someone without the manners or temperament to be the Commander-in-Chief. When he states that a Mexican judge cannot be fair he is expressing an idea clearly representative of his thinking and natural consciousness. When Trump suggests punching a protester in the face, or tries to erase Obama by denying his birth certificate, or expresses disgust toward women and those with handicaps he is offering us the best and most reliable look into his thinking and thought processes.

The clearest and most direct path way into Trump’s consciousness is through his use of language and discourse. By discourse I mean how language is used as a tool for social life and how language carries meaning because it is the most direct link to reality.

For example, the well-known quip that “one man’s terrorist is another man’s freedom fighter” is a good example of the relationship between language and consciousness or the performative expression (the language) of cognitive, sociological, psychological, and political content. An individual act of violence can be framed with all of the assumptions and implications of the term “terrorist” or it can be a noble activity of a group struggling for freedom and human rights – the “freedom fighter.” The language used in particular situations is what evokes the semantic network of meanings, and assumptions, and interpretations that accompany the terminology.

Racists betray themselves through language. They will use a derogatory term to refer to a group (all groups have them, “the N word,” “spic”), associate a particular substandard behavior with a group (“Mexicans are lazy,” “Jews are cheap”) assume commonalities among group members that don’t exist (“all Muslims are violent” “those coming across the border are drug dealers and rapists”), expect bias and distorted interpretations because of group membership (“Israelis and Palestinians perceive things only in accordance with their own interests”), rely on historical stereotypes, and assume that the discriminated against group is less deserving of moral treatment.

There are, of course, volumes written about bias, discrimination, and old-fashioned racism. But one of the more interesting strands in this literature is the practice of morally excluding members of minority groups. In cases of extreme threat and violence (e.g. jihadists) the group is considered unworthy of moral treatment (see Opotow’s research).

Trump’s comment about Mexicans (not to mention women) betrays his attitudes about the moral standing of these groups and the extent to which they can be denied considerations of justice and fairness. Trump has essentially delegitimized Mexicans and by his statement that he could not get fair treatment from a Mexican judge, assumes them to be less developed and worthy. In cases of dangerous violence moral exclusion can justify genocide and extremes. But even if we give Trump more credit than that, he is still expressing an ideology of exclusion which justifies attributions of prejudice and discrimination to the “other” group.

Trumps racism is in line with the tendencies to treat an outgroup (Mexicans) as worthy of special consideration; that is, this group violates some standards assumed to be characteristic of his own ingroup and they are therefore problematic and outside the boundaries of democratic processes. Of course, his reference to the judge as “Mexican” rather than an “American” betrays Trump’s inclination to consider ethnicity as generative and a more explanatory category then being “an American.” That’s rank racism.

Posted in Elections, Media and politics